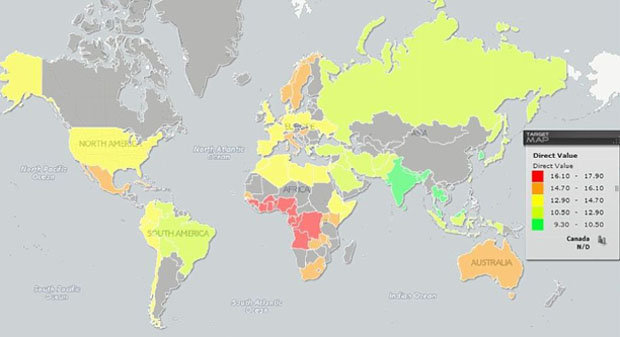 The average schlong size of men in each country has been revealed.

Most lads are curious about how they measure up down under, but now men can see how their schlongs compare to every other country thanks to a new interactive map.
The nifty graphic, created by Target Map, shows how long the average erect penis is across the world.
The map is also colour-coded from red to green to show which countries boast the biggest and smallest members.

It turns out that African men, particularly those from Ghana and Nigeria , have the largest manhoods on the globe.


Their sizeable schlongs range from 6.3 inches (16.1cm) to 7 inches (17.9cm).
On the flip side, Asian lads had the smallest ones on average with South Korean men trailing far behind the rest of the world.

The tiniest todgers on Earth ranged from 3.6 inches (9.3cm) to 4.1 inches (10.5cm).
But British men came slap bang in the middle of the rest, boasting average lengths between 5 inches (12.9cm) and 5.7 inches (14.7cm).
Meanwhile another study revealed there’s some disconnect between men’s perceptions of penis size and the reality.
Delving deeply into what men and women think about schlong length, the survey by Dr Ed asked thousands of people across the world to weigh in on how much size really matters.

It turns out that men and women have very different thoughts on the ideal penis size.
On average, ladies said their ideal sexual partner would have a penis measuring 6.2 inches (15.8cm) in length. Whereas men think their ideal penis would be 6.5 inches (16.6cm).
This means that lads’ idea of the prime penis size is bigger than womens’.