Bedroom Olympics: Which Sex Positions Burns The Most Calories? 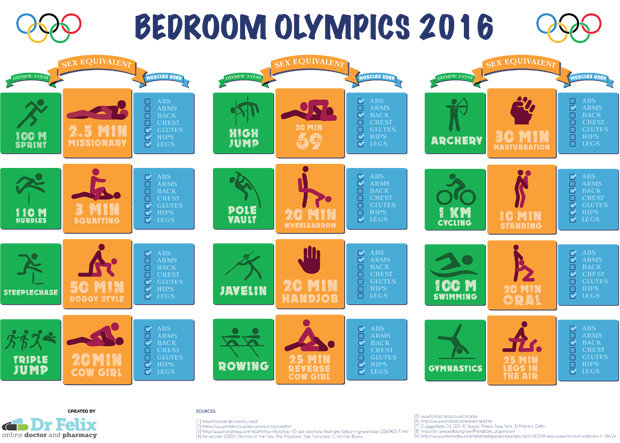 Go for gold between the sheets with these Olympic-style sexcercise moves.

Forget sports because you can burn the same amount of calories as Olympic athletes by simply having sex.
If you’ve been feeling guilty about not getting up off the sofa while tuning in to Rio 2016, don’t worry because spending time between the sheets is actually a great workout in itself.
According to a handy infographic created by online pharmacy Dr Felix, you can torch the same amount of calories in the bedroom as you can in any Olympic event – and all in under an hour.


Who knew that a 100m sprint is the equivalent of enjoying 2.5 minutes of sex in the missionary position?
Even better yet, the classic sex manoeuvre also tones your hips, glutes and legs without you having to hit the gym.
If you want to get rower’s body but without the boat, try indulging in 25 minutes of sex in the reverse cowgirl stance – which will work your arms, back, hips and legs at once.
And instead of swimming for 100m just perform oral sex on your lover for a mere 20 minutes to enjoy the same calorie-burning benefits.

Surprisingly a woman can burn off a whopping 100 calories every half an hour just by giving oral sex.
That's also the equivalent of walking for 35 minutes or doing 15 hardcore minutes on the rowing machine.
While going all the way tends to help you burn through roughly 144 calories per 30 minutes.

Tamsin Nicholson, medical researcher for Dr Felix, said: “Sex has always been a more enjoyable way to burn calories and tone up, especially when compared to hitting the gym.
"Our Olympics-themed Sex Workout Calculator helps you target key areas and offers suggestions that could help you achieve the fantastic physiques of our most successful Olympians.
“Using your MET scores for different positions, we’ve been able to work out exactly how much bedroom activity you’ll need to carry out to match the workouts of your favourite Olympic athletes."

She added: “Just 10 minutes in the missionary position is equivalent to five minutes of running – and we think we know what our customers would prefer.
“You could also end up losing around two pounds per week, just be introducing half an hour of vigorous sex into your daily regime.
“Whether you’re simply trying to burn off the hamburger you had for lunch, or whether you genuinely want to compete with Olympic athletes in your fitness levels, our Sex Workout Calculator can help you get there.”