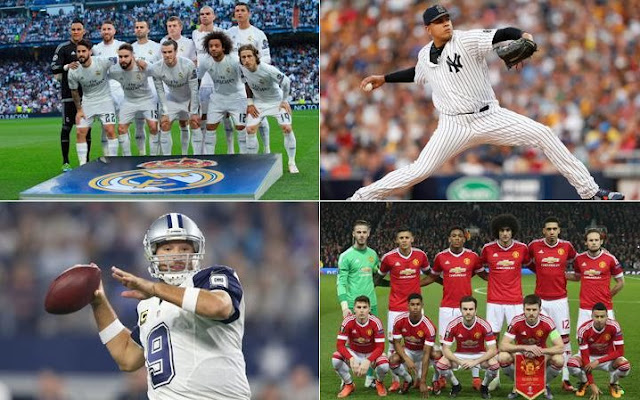 NFL team Dallas Cowboys are now the most valuable sports team in the World according to Forbes annual list of most Valuable sports franchises released this week.

This is the first time since Forbes began compiling their annual top 50 lists of the most valuable sports teams in the world, that a non-football team will be topping it's list.

Manchester United held the crown of most valuable in 2011 and 2012, and Real Madrid did so the last three years, but on this occasion American football outfit Dallas Cowboys rank first with a value of $4billion (£3.31bn), up 25%.

NFL commissioner Roger Goodell earned $145 million over the past four years, or $65 million more than the highest-paid player in the league during that time, Drew Brees. Critics have called for Goodell’s scalp for the way he has handled recent scandals involving Tom Brady, Adrian Peterson and Ray Rice. But Goodell has delivered tremendously for the constituency that signs his checks: NFL owners.


NFL franchises make up 27 of the 50 most valuable sports teams in the world, including the Dallas Cowboys, who rank first with a value of $4 billion, up 25%. It is the first time a non-soccer club has reigned as the most valuable team since 2011 (the first year Forbes compiled a top 50 list). Manchester United held the crown in 2011 and 2012 and Real Madrid the last three years.

The Cowboys are the poster child for the NFL’s ability to make bank, with a sports-team record $270 million in operating profit during the 2014 season, $75 million more than any other franchise. Rich broadcast deals help raise the value of all NFL teams, but owner Jerry Jones separates the Cowboys from the pack by controlling and maximizing the revenue streams from his $1.2 billion home, AT&T Stadium. The team’s premium seat revenue ($125 million) and sponsorship revenue ($120 million) are both tops in the NFL, despite the Cowboys’ failure to make it to the Super Bowl over the past two decades. The Cowboys are also the only team to opt out of the NFL’s licensed merchandise arrangement, which further swells Jones’ coffers.

The NFL’s 32 teams generated $2.4 billion in operating profit during the 2014 season, which was the first of the league’s new network TV deals worth more than $5 billion annually. The average NFL franchise is worth nearly $2 billion, up 160% from $732 million a decade ago. The most valuable NFL teams after the Cowboys are the New England Patriots at No. 6 overall, worth $3.2 billion, and the Washington Redskins at No. 8, with Dan Snyder’s squad worth $2.85 billion.
Real Madrid falls one spot to No. 2 overall at a value of $3.65 billion, up 12%. Real won its 11th European league title in May when it defeated Atletico Madrid on penalty kicks. The Spanish powerhouse, stocked with a pantheon of stars led by the world’s highest-paid athlete Cristiano Ronaldo, tops a group of eight soccer clubs on our list. Real had the highest revenue of any sports team in the world at $694 million during the 2014-15 season. The club will get a boost from an extension to its Adidas kit deal signed earlier in the year. The pact is worth $1.6 billion over 10 years, or four times more than their previous agreement.
Nipping on Real’s heels is its La Liga rival, Barcelona, which ranks third at $3.55 billion. Barcelona, home to five-time FIFA Player of the Year Lionel Messi, signed its own monster kit deal in 2016. The agreement with Nike NKE +0.10% is expected to set a record and be worth as much as $175 million a year, according to reports. Barcelona will kick off a $650 million renovation of its Camp Nou stadium next year. The project will modernize the stadium, expand capacity to 105,000 and help Barca challenge Real for the highest revenues in sports.
The New York Yankees rank fourth, worth $3.4 billion, up 6%. The Bronx Bombers head seven MLB teams in the top 50, down from 12 the previous year. Attendance fell 5.5% last year in the Bronx in the first season without Derek Jeter at short in two decades. The 3.2 million fans were still tops in the American League.
Rounding out the top five is Manchester United at $3.32 billion. United kicked off a 10-year, $1.1 billion kit deal with Adidas for the 2015-16 season, which softened the blow of missing the Champions League. United has the highest debt load of any of the top 25 most valuable teams.
The biggest mover in the top 50 is Stan Kroenke’s Arsenal squad, which rose 13 spots to No. 23 with a value of $2.02 billion. The Gunners had the most expensive season tickets in the sport this year at $1,500-$3,000 for adults. Arsenal also received the biggest cut of Premier League TV money this season at $148 million, or $7 million more than Manchester City.
The biggest drop was the Ferrari Formula One team, which ranked 32nd in 2015, but fell out of the top 50. F1’s richest team is worth $1.35 billion, flat from the previous year, but couldn’t keep up with the exploding franchise values in team sports.
The average franchise in the top 50 is worth $2.2 billion versus $1.75 billion a year ago. The breakdown by sport is 27 NFL teams (versus 20 last year),  seven MLB (versus 12), eight NBA (versus 10) and eight European soccer (versus seven). The New York Knicks are the most valuable NBA team at $3 billion and rank No. 7 overall. No F1, Nascar or hockey teams made the grade. The minimum to make the cut is up 20% to $1.48 billion (Jacksonville Jaguars). There are 76 franchises worth at least $1 billion by our count.
Our franchise values are based on the Forbes valuations done over the past year for NFL, NHL, NBA, MLB, F1, soccer and Nascar. Some team values have shifted since our last published reports, but they are not reflected here. Most notably, the former St. Louis Rams relocated to Los Angeles, increasing the team’s value from our September estimate of $1.46 billion. Forbes’ team values are enterprise values (equity plus debt) based on current stadium deals (unless a new stadium is pending). 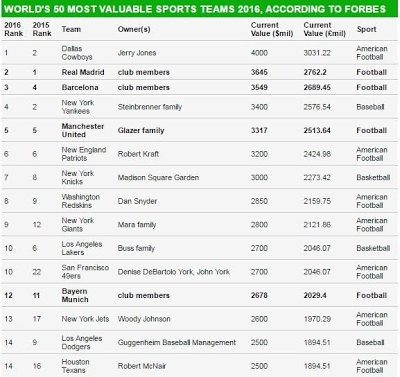 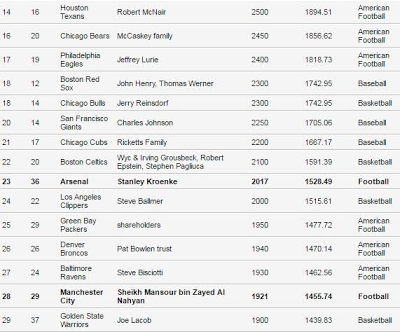 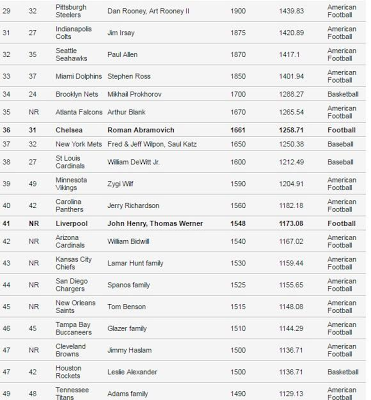