2 Women Arrested For Begging With 'Rented Babies in Lagos 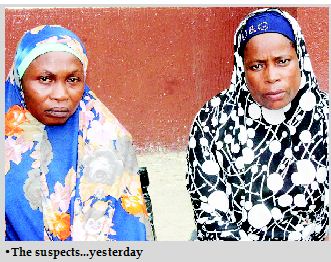 Two women were yesterday arrested in Oyingbo, Lagos, for using babies to beg for alms.

Three babies who are less than one month old were recovered from them.

Hadiza Nosiru and Salamotu Salitu were arrested by the monitoring team of Lagos State Ministry of Youth and Social Development.

They have been taken to the Rehabilitation and Training Centre at Majidun, new Ikorodu.
The ministry said preliminary investigation showed that the women were not the biological mothers of the babies. The babies the ministry said, were given out to the women by their parents, who are paid daily.

One of the babies mothers, who was paraded at the state secretariat on Alausa, Ikeja, yesterday gave her name as Tawa Aregbesola from Ibadan, the Oyo State Capital. She said she had an agreement with one of the suspects to take her baby for alms begging between 5pm and 7pm daily for between N1000 and N1500.

Aregbesola, a mother of four, said she did not know where her baby is usually taken to adding that she was oblivious of the consequences.

The commissioner noted that the practice was prevalent among female beggars especially from the north. She promised to take legal steps to deter others who may also wasn’t to indulge in the proactive.