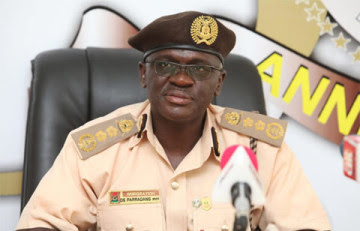 The Nigeria Immigration Service said it barred no fewer than 4,916 Nigerians from travelling out of the country between January and March, 2015.
The Nigerians were suspected to be on their way to join international terrorist organisations, including the Islamic State of Syria and Iraq and the Taliban, sources within the NIS confided in our correspondent.
The NIS also said that 758 Nigerians were refused entry abroad while 1, 368 others were deported within the period.
Also, it said 12,152 foreigners were refused entry into Nigeria because they had no genuine reasons for visiting the country.
For the whole of 2014, the NIS prevented 18,555 Nigerians from leaving the country, according to passenger movement returns obtained from the service.
Two Nigerian youths suspected to be on their way to Iraq to join the ISIS were arrested by the Indian security service last week after scaling a barbed wire fence near the international border.


The two youths from Kano State, identified as Imran Kabeer and Sani Jamiliu, were being detained by the Punjab Police in India.
The NIS Public Relations Officer, Emeka Obua, in an interview on Monday said the organisation had intensified profiling of travellers as part of measures to check people going abroad to do things that are inimical to themselves and the image of the country.
When asked why the NIS was not able to stop the two Nigerian youths arrested in India, Obua explained that in spite of the efforts of the service, many individuals still managed to escape.
He said, “Before the advent of ISIS, the NIS had been battling with illegal migration, organised or otherwise. The push and pull factors have always been there and the NIS has fashioned a robust profiling mechanism that identifies those whose intent for going abroad is either inimical to themselves or the image of the country.
“The NIS has always tried to stop young Nigerians travelling for doubtful reasons. It’s easy to know when you see their young age; many of them are sponsored but many escape the immigration dragnet and our expansive and extensive borders are not helping matters and the NIS didn’t have enough personnel to man all the borders.”
Obua clarified that many young people were being recruited by the ISIS through the internet and social media, stressing that terrorism had become a global challenge for security agencies.
When asked to explain the nature of the profiling been carried out on intending travellers, the NIS spokesman said that it involved thorough interrogation of the subject on his age, travelling plans, means of income, reasons for travelling and his sponsors.
He said, “We look at the age bracket of the intending travellers and the persons they are travelling with, put them by the side and profiled them thoroughly. What are their intentions for going abroad? Where are they going? Who are they going to meet? How much do they have on them? Are they staying in a hotel?
“In the course of this profiling, you would find out the truth.”
When contacted on the fate of the two Nigerians in detention in India, the Ministry of Foreign Affairs’ spokesman, Ogbole Ahmedu-Ode, said he was in a meeting and asked to be given some time. He later refused to pick subsequent calls to his phone by our correspondent.
Meanwhile, the Borno State Governor, Alhaji Kashim Shettima, on Monday described the Nigerian violent Islamic sect, Boko Haram, as an offspring of the pretentious nature of many Nigerians to issues of religion and godliness.
Shettima, whose Borno serves as the operating headquarters of the insurgents, lamented that many Nigerians were “God in mouth but devil in heart,” which explains why the nation has been bedevilled by the Boko Haram crisis.
He said the philosophy of Boko Haram was strange to the Islamic religion.
Addressing the leader of Borno State delegation to the 2015 holy pilgrimage in Jerusalem at the Government House in Maiduguri, Shettima said if Nigerians had practised their religions according to their dictates, the nation would not be witnessing the ongoing Boko Haram crisis.