Five Star Records and Their Many Controversies 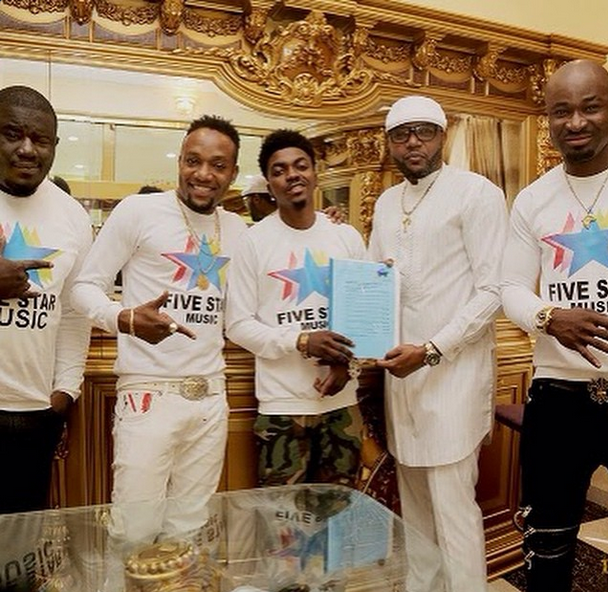 What could possibly be the challenges the artistes at Five Star record label going through? Virtually all the singers in that label have created one controversy or the other.
Let’s start with Kcee, while on popular programme with Toolz, ‘The Juice,’ he denied ever getting married to his estranged wife Ijeoma Cynthia Okonkwo (nee Oduah) and claims the woman is his elder sister. This got many talking and wondering what could possibly be wrong with the singer but the matter has been long forgotten.
Harry Song came up with his own tale in an interview which he denied that he was a product of incest. When the story trended and calls and comments were coming in, the singer denied the allegations stating that he never said such even threatening to sue the writer.


Well, thinking that all was fine with the singers as they seems to have been calm with their controversies, Kcee’s manager, Sososo Berekon, needed a hype for himself as he decided to share a picture of himself with some mobile men while having bottles of beer.
Now, the trendiest of all controversies is the records new artiste, Skiibii. The singer has been on some media tour trying to promote his new song and in other to have a quick wider coverage, the singer and his label team decided to stage a prank which got everyone in a sober mood when it was alleged that the singer is dead.
Even the label’s manager, Sososo Berekon shared a candle to signify that the singer had died. Within the space of about five hours, it became a trending issue only for many to be shocked at the latest news by Kcee that the singer was ok and only slumped but was recovering in an undisclosed hospital.
From the look of things, the stars in this record label just need to grow and truly define a strategic means of promoting themselves rather than set hearts pondering. Who dare jokes with death? With the way they have been pushing themselves with various controversies, their credibility will soon be in doubt.