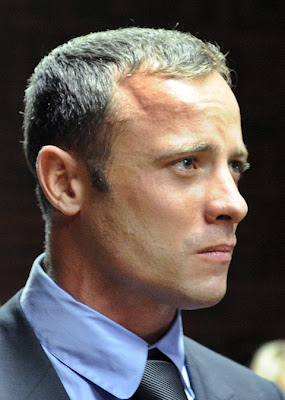 A witness heard gunshots, screaming, and then more shots fired at the home of athlete Oscar Pistorius on the night Reeva Steenkamp was killed, a police officer has said.
Day two of his bail hearing in Pretoria also heard police suggest Mr Pistorius may flee if he is granted bail.

He denies the premeditated murder of Ms Steenkamp, his girlfriend, saying he mistook her for an intruder.

A full trial of the Paralympic star, 26, is not expected for months.
However, allegations of what happened on Valentine's Day last week have continued to emerge in the packed courtroom.
The second day of the bail hearing saw Mr Pistorius hit by claims the police and prosecution say undermine his defence.
The session was adjourned until Thursday, when there could be a ruling on the bail issue. 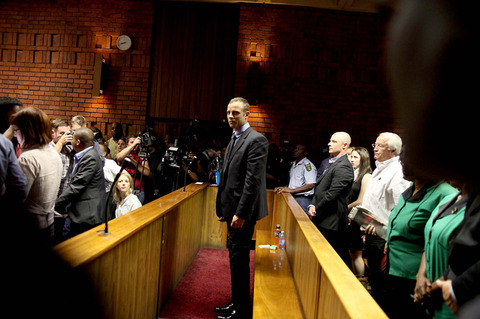 As the prosecution began setting out its case on Wednesday, it said a witness had testified to hearing "non-stop talking like fighting" between 02:00 and 03:00 on 14 February.
Chief investigative officer Hilton Botha, who was the first officer at the scene, later said another witness had testified to hearing screams and gunshots from the house.
"We have the statement of a person who said after he heard gunshots, he went to his balcony and saw the light was on. Then he heard a female screaming two-three times, then more gunshots," Detective Botha told the court.
But doubts were cast on the validity of that evidence when Det Botha told court the witness heard the alleged altercation from some 600m (1,800ft) away.

He later amended his testimony, telling the prosecution after the lunchtime break the witness was 300m away, not 600m.
Mr Pistorius claims he was asleep until only moments before the shooting and that there was no argument between the couple. 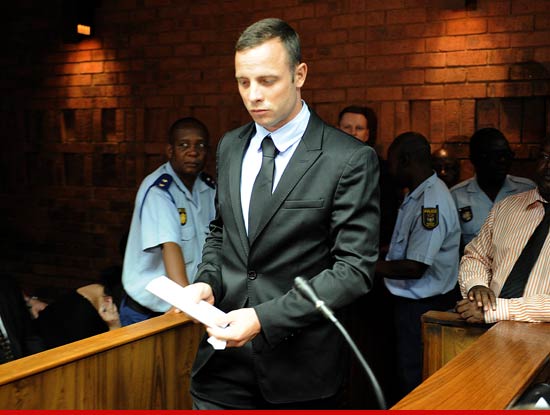 But Det Botha's testimony demonstrated his belief that Mr Pistorius deliberately shot Reeva Steenkamp.
"I believe that he knew that Reeva was in the bathroom and he shot four shots through the door," he told the court.
Earlier, Det Botha said he arrived at the house at 04:15 and found Ms Steenkamp lying dead on the ground floor. She was wearing white shorts and a black vest, he said and was covered in towels.
A lawyer and Mr Pistorius's brother were already at the scene.

Ms Steenkamp was shot in the right side of her head, her right hip and her right elbow, Det Botha said. 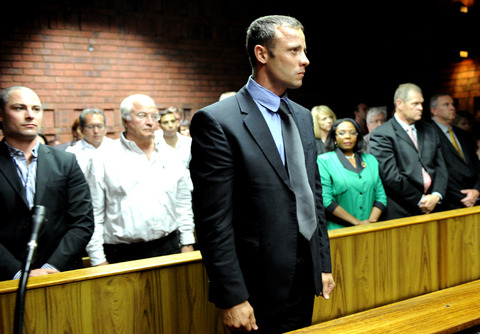 The officer later testified that he thought the bullets were fired "down", suggesting Mr Pistorius had his prosthetic legs on.
Mr Pistorius has claimed he was walking on his stumps, making him feel particularly vulnerable.
But the prosecution has argued he stopped to put his legs on, adding weight to its case that the shooting was premeditated.

But Det Botha was later put on the defensive when questioned by Mr Pistorius's lawyer, says our correspondent.

The testosterone found did actually athletes use a legal herbal remedy, the defence said.
Defence lawyers said a post-mortem examination showed Ms Steenkamp had an empty bladder consistent with someone getting up to go to the toilet, as detailed in Mr Pistorius's narrative.
The defence accused Det Botha of putting the "worst possible interpretation" on the evidence.
Det Botha agreed the post-mortem examination had showed no signs of assault or defensive wounds on Ms Steenkamp.
On Tuesday, Mr Pistorius told the court he had woken in the middle of the night and heard what he thought was an intruder in the bathroom.

He shot through the door and only then realised Ms Steenkamp was not in bed.
He said he was "absolutely mortified" at her death.
The magistrate has deemed this a "schedule six" case, meaning Mr Pistorius is accused of premeditated murder.
His defence team will have to prove the extenuating circumstances that would justify granting bail.
The first day of the hearing on Tuesday coincided with Ms Steenkamp's funeral.
The 29-year-old model and law graduate was cremated in her hometown of Port Elizabeth where her father, Barry Steenkamp, told reporters: "We have to keep Reeva in our hearts for ever."
Oscar Pistorius won gold medals at the 2004 Paralympic Games in Athens, in Beijing in 2008 and London in 2012.
In London he made history by becoming the first double-amputee to run in the Olympics, making the semi-final of the 400m.
Posted by Unknown at 20:32:00