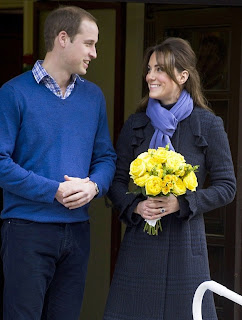 "Their Royal Highnesses The Duke and Duchess of Cambridge are delighted to confirm they are expecting a baby in July," read the simple statement.
"The Duchess' condition continues to improve since her stay in hospital last month," the statement also said, referring to her recent hospitalization.
Kate sought treatment in early December for severe morning sickness; the now-infamous Kate Middleton prank call resulted in a nurse's suicide.
A Palace source confirms that Kate is not expecting twins, despite recent speculation. Also, the couple will not be revealing the sex of the baby.
A July arrival would allow the baby to share the same birth month as William's late mother Diana, Princess of Wales, who was born on July 1.
Insiders say that the timing of the announcement means they have likely had their scans to show that the pregnancy is going according to plan.
There is clear relief around the Palace, especially after her hospitalization, that they have been able to release the news. "Happy days," said a source.
Posted by Unknown at 15:53:00