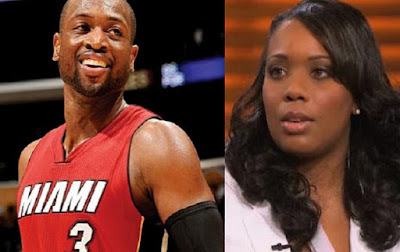 Siovaughn Wade is still coming for Dwyane Wade’s checks in a revised divorce settlement…but that’s not the only way she’s seeking to cash in on her failed marriage to the basketball star.

Just last month, Siovaughn released a self-published tell-all memoir, entitled The True Story for God’s Glory, detailing the ins and outs of her time as a basketball wife and hitting rock bottom once it was all over.


Chicago Tribune: Siovaughn Funches-Wade may be trying to squeeze an extra buck out of her $5 million divorce settlement from Chicago Bulls star Dwyane Wade, but she “loathed money” as their marriage fell apart, she says.
In an emotionally raw autobiography published late last month, the basketball player’s former high school sweetheart admits she became “an arrogant diva” to try to fit in with the NBA wives club, repeats allegations made in court during a divorce battle that Wade beat her, and claims an unnamed mistress of Wade’s called her at 3 a.m. to boast about her trysts with Wade.


She also complains that living with Wade in Miami was like living in a “$4 million … prison,” alleges that an unnamed former teammate of Wade’s with the Miami Heat “suggested that I have an affair right after a game while still inside the Miami Heat Arena,” and writes about her regrets over an abortion she had during a “hell on high heels life.”
Damn, sounds crazy! Even though Siovaughn details a restrictive life with Dwyane — whom she never calls by name in the book — and details physical and emotional abuse at his hands…she says the obscene amounts of money the couple saw and her idolization of wealth is truly what took her down the darkest path of her life:
Once they hit it rich, the stylish Wade would spend as much as $100,000 a month on custom clothes, she wrote.
But when their marriage turned sour, she alleged in the book, he’d tell her “I want to sow my wild oats” and “This isn’t your money and if you leave, nobody is going to want you and you aren’t going to have anything without me. You will end up having to go back and live at your mama’s house!”
Funches-Wade writes that she later found pictures and instant messages from other women on Wade’s phone. The marriage ended soon after, according to Funches-Wade’s account, when a woman called her in the middle of the night and told her she had just slept with Wade. The woman gave “a description of the underwear he was wearing,” Funches-Wade wrote.
Still, Funches-Wade writes that money was the cause of her greatest struggle.
“I got divorced and had both my children wrongfully taken from me, I lost my home and my health, my reputation was destroyed,” she wrote. “But it was all nothing compared to the pain I felt from the love of money. From that pain I am still healing to this day.”
“I had never felt in my life true emptiness until my bank account was full.”