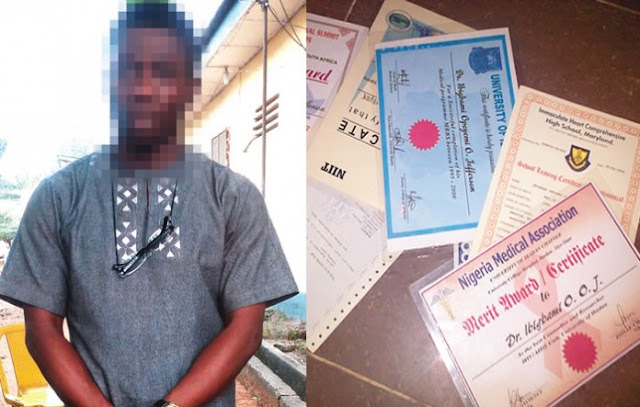 A 43-year-old man, Opeyemi Adesina, who allegedly paraded himself as a consultant gynaecologist with the Lagos University Teaching Hospital, Idi-Araba, says he paid N100,000 to buy the seven forged certificates he used.

Adesina, who hails from Ekiti State, was arrested on Tuesday by the Alakara Police Division on Alowolodu Street in the Alapere, Ketu area of Lagos State.

PUNCH Metro gathered that Adesina was arrested after his landlord, identified only as Akorede, wrote a “save-my-soul” petition to the management of LUTH some weeks ago alleging that Adesina brought home female patients to treat in his house and did abortions for them, among other unwholesome practices which could implicate him (the landlord).
Akorede had further explained in the letter that when he confronted Adesina, the doctor allegedly claimed to be a consultant gynaecologist with LUTH, adding that he (Adesina) brought the referral cases from the hospital to his house so that he could have time to attend to them.

PUNCH Metro learnt that the LUTH authorities, who could not find such name in the record of their consultants, forwarded the letter to the police, and Adesina was thereafter arrested.

It was gathered that the police also recovered the forged certificates.

Speaking with PUNCH Metro, Adesina said he paid N100,000 to one Kolawole in Ibadan, Oyo State, to get the certificates, adding that he had used them for only three years.

He said, “I bought the certificates from Kolawole in Ibadan. That was three years ago. I bought them from him for N100,000. He printed the seven certificates.

“I do not know where he stays. We did not meet in any specific location. We usually met at fast food joints or any agreed place. For instance, it was at Agodi Gate area that I gave him the money and got the certificates. I decided to use another name on the certificates.
“I forged them because I dropped out of the university. I was actually studying Medicine. However, I dropped out in the 500 level due to financial reasons.

“I married my wife about five years ago. She thought I was a certified doctor. She actually came to me for treatment in the Ketu area and that was how we met. We have a child.”

Adesina, who denied his landlord’s allegation, said he only operated a laboratory where he attended to his patients.

He said, “Three years ago, I decided to get the certificates just to cover up for the failure to finish my university education.
“It is not true that I brought women to treat at home. The truth of the matter is that I have a laboratory and the women came there. I usually did tests for them and by the time the test results were out, I would ask them to visit a hospital for treatment.”

The suspect’s wife, Olawumi, pleaded that her husband should be released as he had realised his mistake, and would never venture into such again.
The Lagos State Police Public Relations Officer, SP Dolapo Badmos, said the suspect would be charged to court as soon as investigation was over.