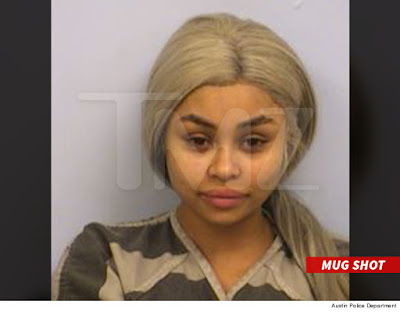 Blac Chyna just jetted off to London — giving Mama Kris a chance to roll up in her house and give her son Rob a talking to. But it looks like she won’t be making it to her final destination quite yet…seeing as how she just managed to get herself cuffed and thrown behind bars during her layover in TX.
TMZ: Blac Chyna was arrested Friday after allegedly getting drunk and becoming belligerent during a trip to London … TMZ has learned.
Chyna was busted in the Austin-Bergstrom International Airport Friday afternoon. Cops tells us, she was on her way to board her connecting flight to London when she started getting loud. She stormed toward the gate, got on the plane and screamed at a flight attendant, “Nasty ass bitch!”


That was enough for cops … they got on the plane and arrested her on the spot.
An eyewitness tells TMZ, Chyna appeared “heavily intoxicated” and was “fighting” with a flight attendant, acting “like a drunken fool.” Another eyewitness says, at one point she screamed, “Y’all got no respect for me. I gotta tie my shoes. Let me tie my Yeezys.”
She’d just taken off a few hours earlier from LAX aboard a Delta flight.
An eyewitness tells us, Chyna was handcuffed and crying as cops took her away.
Chyna was in jail at the time of this post. She was booked for public intoxication.