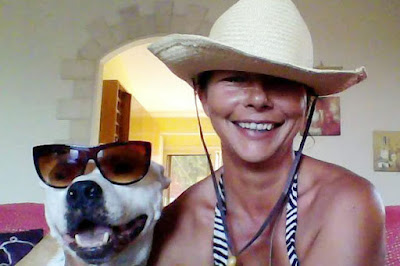 DOCTORS discover enormous mass on woman's ovary is actually her unborn twin, which had been growing inside her for 40 years.

Jenny Kavanagh went to her GP to have a contraceptive coil implanted and medics insisted on an ultrasound of her ovaries due to her age.
But the 45-year-old was left stunned when medics spotted a 10cm mass growing on her left ovary.
She was warned that the growth could rupture and kill her at any moment.
And when surgeons went in to remove the lump they discovered it was actually her undeveloped unborn twin, which had grown inside her from birth.
The mass was complete with a face, an eye, a tooth and long black hair like Jenny's.

Logistics officer Jenny, from Twickenham, London, said: "I feel very lucky that they found it and removed it before it killed me.
"I try not to think of it too much because I don't want to feel sad about it.
"If I'm honest, I did feel sad when I first saw it, because of the size and weight of it, it had already been likened to a baby."
"But I try not to feel sad about it. I try to remember that it had no heart and no brain."

The mum-of-two, who admits she has always avoided doctors and has never visited a gynaecologist, said the discovery left her feeling a mix of emotions.
"In one sense there was grief, mixed with happiness," she said. "It was like a baby, but I was still glad it was out of me."
Divorced Jenny grew up in London, but moved to Cyprus in 2005 with her then-husband, to escape the 'rat race'.
She had no problems with either of her pregnancies, but when she started to have heavy periods she worried it might be due to a coil she had fitted 15 years ago and went to get a new one.

The consultant scanned her abdomen and while her right ovary was totally normal, the one on the left side had a 10cm dark mass, in May this year.
Her doctor assured her it was unlikely to be a cancerous tumour - and probably a teratoma or cyst - but Jenny was worried.
"I thought the worst," she said. "He advised me it would have to come out regardless.
"If it twisted or ruptured it could kill me," she added.
After tests proved inconclusive, 11 days later Jenny when under the knife for a three-hour operation to remove the mass at The Mediterranean Hospital of Cyprus.
Doctors agreed to take a photo of the mass on her phone and showed her it when she came around, explaining it was a mass of cells which had been inside her since birth.

When she looked at the snaps she was shocked to see long strands of dark hair, just like hers.

Jenny said: "The whole thing was so surreal I think I needed to see them to get my head around it all.
"We cannot know for sure that it was an unborn twin, but the doctors said it most likely was a stem cell that I have had from birth.
"It is possible that there were twin embryos and one enveloped the other.
"The fact that it had long black hair - just like mine - a face, with one eye and one baby tooth makes it more believable.
"It's difficult to describe how I felt when I saw it. I felt shocked, very scared, horrified and it felt like an alien was inside me."
"But the bigger it grew, the bigger the chance of a haemorrhage," said Jenny, who has now made a fully recovery added.
"When I showed the picture to my mum she was really sad - saw it as her unborn child, and my unborn twin."