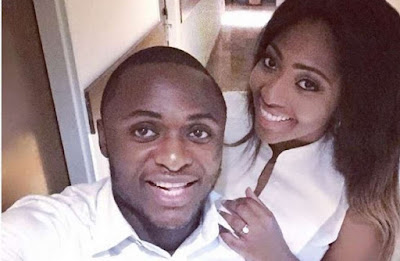 Emerging celebrity couple, Made Men Music Group boss, Ubi Franklin and actress, Lillian Esoro have been in the news lately after the two love birds were spotted together at AY's younger brother's traditional wedding in Owerri, Imo State.
Rumours even have it that they had quietly done their first marriage introduction, but kept it very private.
When the entertainment boss was contacted on the marriage speculation, he flared up and almost rained abuses on The Punch reporter.
Ubi chose to reply with all the foul and swear words he could think of.
“No one should f**king ask me about my private life. You can ask me about my artiste or my company but don’t ever f**king ask me about my private life, it is not your business!, he replied rudely.


Few months ago, when he newly proposed to Lilian, Ubi goes about telling everyone that cared to listen of how much he loves Lillian, “I asked God that I needed a woman to marry and settle down with. After I prayed about it for about a week, I met Lillian at a friend’s party. The day I met her, I saw the qualities I wanted in a woman I want to be with for the rest of my life.
The marriage would definitely be this year in Nigeria. I am not a fan of marrying abroad. I have nothing against people that do it but the truth is many people that ought to come and pray for you would not make it if you travel out of the country,” He had said.
But after controversies trailed the love triangle between him, Lilian Esoro and Emma Nyra, he opted to keep his love life very private.