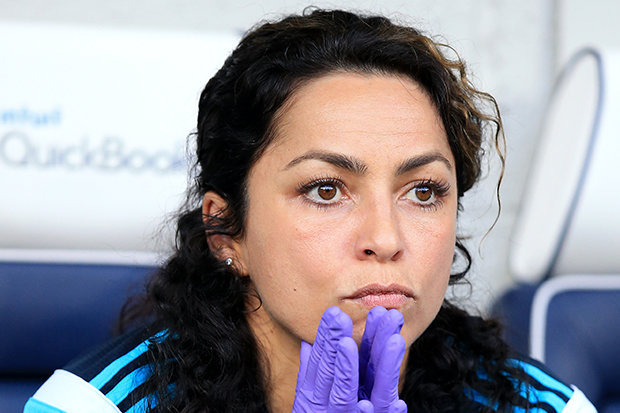 EMBATTLED Chelsea doctor Eva Carneiro is "sex-mad" and "ruthless", according to her ex-lover.

Rupert Patterson-Ward claimed he romped with the medic "every single day" during their 15-month relationship.
Eva, 41, was demoted from the Blues' bench last week after a row with mouthy Blues boss Jose Mourinho.
The Portuguese slammed her for running onto the pitch to help an injured player during a 2-2 draw with Swansea.
She will not travel to Manchester today as champions Chelsea take on Premier League rivals Manchester City.


Revealing all about the doc who "ruined my life", Rupert said: "Eva is a very sexual woman and not many people know the real her.
"She's ruthless and gets whatever and whoever she wants.
"I was besotted with her and we were planning a family, but she chewed me up and spat me out."
Rupert claimed she met the "fiery" and "passionate" Eva in 2011 – and at the start they were "blissfully" happy.
Discussing one of their steamy romps, Rupert said: "She took me to her bedroom, and with a twinkle in her eye said, 'I need to treat you'.
"She tore off my clothes, glanced at my shoulder, jumped on me and we had passionate sex."

But they split at the end of the 2013 season after a series of furious bust-up.
The Gibraltar-born doc reportedly taunted him by claiming she'd slept with a player during their time together.
But he said that Eva "said it just to make me feel bad. I don't believe it was true".
He added: "After one match [a player] called her to his hotel room and answered the door completely starkers.
"Eva rubbed my nose in it when we rowed. It was cruel.
"She is a fiery Latino, sex-mad, and prides herself on being popular among the players. Eva loved the attention."
Eva – who has been tipped to star on Celebrity Big Brother – also "rubbished" Rupert because he earned less than £30,000 a year, he claimed.
The advertising salesman told the Sun: "I tried so hard but nothing was good enough for her."