Photos: Sad Tale Of How Nigerian Girls Got Turned To Sex Slaves In Dubai Through Blackmail 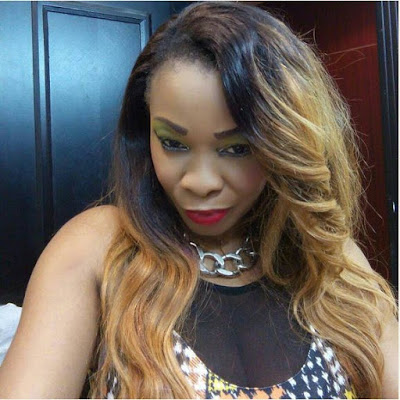 In a new article by Punch, a “PROSTITUTION BUSINESS EMPIRE” run by the Nigerian woman in the picture above, Esther Nicole Otubo, has been exposed.

Within the article is a recount of how a number of girls were cajoled into taking nude pictures of themselves which Madam Esther above went on to use as blackmail to keep the girls working for her.

Read the sad yet interesting story after the jump and tell us what you think about it TILB Readers: Sometime in 2014, a young beautiful girl, Ms Precious, completed her university education and the National Youth Service Corps programme in Edo State.

Precious, as she identified herself while nude in a video, decided to seek better opportunity outside Nigeria. She chose a booming beautiful Arab city, Dubai, as her port of future success.

Precious convinced her parents to finance her desire to travel. Her mother had no option than to support her by processing the needed travel documents to her dreamland. On August 28, 2014, the naïve, young and pretty lady was ordered to stand naked in front of a camera by one of the most notorious Nigerian sex slave and human traffickers in Dubai, Esther Nicole Otubo.

The video recordings of this innocent girl were to blackmail her and other girls under her “PROSTITUTION BUSINESS EMPIRE” in case they refused to pay their daily dividends to her. Precious hopelessly agreed to Otubo’s terms of engagement, as captured in the video transcript:

Esther Nicole: Precious, which part of Nigeria are you from?

Esther Nicole: Okay. Where are you right now?

Esther Nicole: Dubai? What did you come to do here?

Esther Nicole: Prostitution. Were you forced to come here?

Esther Nicole: You agreed on your own to come here. Did you go for swearing (sic)?

Esther Nicole: Who and you (sic) went for the swearing?

Precious: Me and my parents

Esther Nicole: You and who?

Precious: Me and my mother (sic)

Esther Nicole: Okay …so you just arrived in Dubai, yeah?

Esther Nicole: So this is to show that this is what you came to do here and you are going to abide by the rules in this house. Do you agree?

Esther Nicole: And when you are done paying your money, everything here would be deleted, but if you go against the laws in this house, this would be published and sent to your family. Do you agree?

This week, the video exploded on social media and exposed the sex slavery and prostitution of Nigerian women by their fellow citizens in Dubai.

The Dubai Madams have, within the past five years, slowly grown into a profitable money-making adventure for these human traffickers.

The business, according to sources in Dubai, is mega profitable, netting an average of $30,000 (about N6m) monthly for the Madams that camp these girls in sex units or three-star hotels in the United Arab Emirates, the centre of glitz and glamour where commercial sex by these Nigerian women seems to be in high demand.

Anne Dubai has all the aura of a sin city. It’s beautiful, sitting 52 feet above the sea level, the economic and powerhouse gate pass to Asia and the Middle East. It is a liberal rich city that accommodates and tolerates all creatures, great and small.

Though its socio economy is controlled by rich merchant Arabs and middle easterners, Nigerian women have found a spot to syndicate their hospitality and human services in commercial sex, pimping vulnerable young girls they lure from their various Nigerian towns and villages to the Emirates’ mega city. Emeka Ugwuonye, an attorney, is representing Precious.

Ugwuonye, through his advocacy group, Due Process Advocates, is in the lead to hunt and prosecute these Nigerian ‘Dubai Madams’ who are involved in the sex slavery and human trafficking of young naïve Nigerian women desperately but innocently seeking to better their lives. Ugwuonye and his advocacy group have, through their investigations, successfully identified some of these ‘Madams’ and their illicit and illegal business of importing Nigerian young girls to Dubai, with a promise of making lucrative money in the city, but only to get there and be subjected to commercial sex slavery and garnish their wages. He told me, “Jebose, I have videos of two different girls recorded under the most debasing conditions, naked and scared. What Nicole does is to videotape these girls in the nude and blackmail them into prostitution in Dubai.

This woman is like none that you have come across before. She is a ‘Madam’ and a human trafficker. She takes desperate young Nigerian girls on a sex slave mission to Dubai or other Middle Eastern countries for prostitution. Before they leave Nigeria, she would first make the girls and their parents swear an oath at a local shrine in the belief that such would place a curse of sudden death on those girls were they to disobey her.

The total amount she plans to get from each girl is about $30,000. Ebony “The girl is to become a prostitute, make money from her ‘clients’ and keep giving such money to the woman until she agrees she has received $30,000 from the girl. This Madam uses blackmail as an additional means of enforcing her plan. She would take a video recording of each girl, who would have been made to stand stark naked.

She would tell each girl that if she failed to pay her $30,000 when she gets to Dubai or elsewhere, she would release the video tape on Facebook and would delete it when she eventually gets paid. “These girls apparently agree to this. I use the word “apparently” on purpose to raise questions about the voluntariness of these girls’ participation in this.

Ostensibly, some of these girls have not paid the Madam all the money she demanded of them. That must have been what led Madam to release that video on Facebook. I have seen videos of three girls in such humiliation. People forwarded them to me in order for me to use DPA to help track down the woman that is behind all this. “There are many, many Nigerian girls suffering under her control.

These girls lack the ability to cry out. They are in slavery and bondage. We must set them free and we must have the ‘Madam’ arrested.” Ugwuonye also identified a second ‘Madam’ in this Dubai commercial sex deal gone bad. He added, “Madam Ann, which is the only name we have of her, has five girls under her control. Madam Ann lodges her girls in a three-star hotel while she would stay at home and offer them men in exchange for cash.

After each girl must have slept with four or five men, Madam Ann would come and collect the money they would have made from them. “The hotels cannot be busted by the Dubai Police.

These Madams change hotels like every two days to remain undetected. Any girl that stays in the hotel for more than four days would be expected to leave because of the slow sex seekers’ traffic. The hotel’s members of staff may not know what is going on.

So if there are steady traffic of clients in the hotel and to a particular room, after two days, the hotel would notice and ask the girls to leave. The only things they take to the hotels are sexy lingerie to entice customers.” Earlier in the week, the police had reportedly apprehended the ‘Madams’ who had been on the run since the video went viral on social media. Pictures of the other 2 women involved in the business: