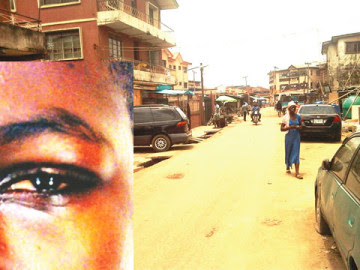 A 15-year-old boy, identified only as Bolu, has become partially blind after his step mother, Esther Modupe, allegedly flogged him in the Onipanu area of Lagos.
PUNCH Metro learnt that Bolu, who is to sit for the post-Unified Tertiary Matriculation Examination of a university in Lagos State, could not see with his left eye.
It was learnt that the cane inadvertently hit the boy’s left eye during the flogging.
Our correspondent gathered that Bolu’s mother had separated from her husband, Lekan Williams, about 10 years ago, and her two children were brought up by the husband alone until three years ago when Lekan married a second wife ─ Esther.
PUNCH Metro learnt that Esther, who had yet to bear a child for Lekan, was the one taking care of the children before the flogging issue.


It was gathered that Esther and Lekan were arrested by the Surulere Police Division on Monday, August 10.
Our correspondent learnt that on Tuesday, June 16, the family, who stayed in a rented apartment on Owodunni Street, had gone to church, leaving the key to the apartment with Bolu.
It was learnt that the teenager, however, arrived late at home to the annoyance of Esther, who consequently flogged the boy in annoyance. The cane was said to have hit the boy in anger.
The boy’s eye reportedly became swollen after which he was said to have been rushed to a private hospital.
Our correspondent gathered that the condition of the eye, however, gradually worsened and after a month later, Bolu was said to have gone partially blind.
When our correspondent visited the apartment, one of the neighbours, who spoke on condition of anonymity, said Esther was friendly to the two children left by the first wife, adding that it was unfortunate that the flogging caused a problem.
He said, “Bolu’s mother packed out of this house about 10 years ago. She knew she had two children, but she abandoned them. The man was forced to marry a second wife about three years ago. That was when Esther started living here.
“The woman worked as a private school teacher, and she was very nice to Bolu and his younger brother. The two also liked her, and you will not even know they were not her children. But it turned out that on that day that she was angry and flogged the boy. The cane hit him in the eye.
“They initially thought it was a small thing. But it turned out to be a big problem. The mother then showed up and took him away.”
Another resident and shop owner, identified only as Mama Olu, said the act was unintentional, adding that Bolu, who would be sitting for the post-UTME soon, did not open up on his condition on time.
She said, “Bolu is a cool-headed boy, and he loved the woman too. Esther too was close to the children. She taught them lessons, and bought clothes for them. It is the father that I blame because he did not notice the boy’s condition and take him to a hospital before it was too late.
“Now, the result of the medical test stated that the boy has lost the eye. It is unfortunate; the woman was nice to her step sons.”
PUNCH Metro learnt that Bolu’s mother had come to the area on Monday, and took the boy away.
It was also gathered that the matter had been brought to the attention of the Lagos State Domestic and Sexual Violence Response Team, which was coordinating other agencies to provide rehabilitation for the boy.
The Lagos State Police Public Relations Officer, DSP Patricia Amadin, confirmed the arrest.