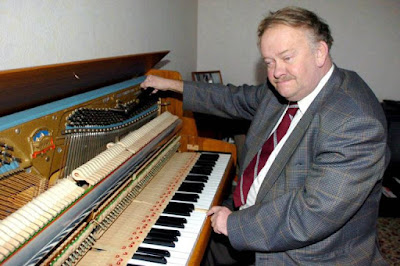 A blind piano tuner who groped and even licked the faces of female social workers helping him has been jailed for 21 months.

A court how Gerald Masters, 66, subjected women to a ‘campaign’ of sexual abuse while they assisted him both at work and socially.

Masters has been blind for almost a decade due to diabetes, and employed women to help him with his business.

One woman complained that he started making sexual comments towards her even as he interviewed her.

This woman told Bristol Crown Court how she thought about refusing the job, but needed the money so accepted it.

‘Was I wearing stockings and suspenders? I was quite shocked.’

Masters even groped one woman’s breasts before asking her to perform a sex act on him, and put his tongue in another’s ear and on her face.

In his defence the piano tuner claimed one of the women had made sexual advances towards him, however the court was unconvinced.

Sentencing Masters to 21 months in prison and handing him a 10-year Sexual Harm Prevention order, Judge Mark Horton told him: ‘This was a campaign of sexual assault against four different women – four different women who fought off your advances and attempted to tolerate you acting out your fantasies sexually on them.’