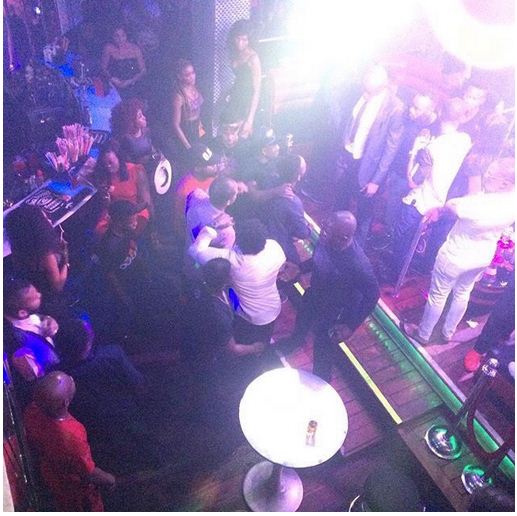 According to reports, Wizkid and Dammy Krane engaged in a bloody and physical fight early this morning, January 15 at Club Quilox in Lagos.. He allegedly smashed a bottle on Dammy Krane's head....

This comes after Dammy Krane apologized for bashing him on twitter, but still accused him of stealing his latest hit "Baba nla"and slangs like Pull over,sleeping on a bicycle.....

Here’s how it all started.

Super Eagles striker Obafemi Martins held an exclusive ‘All Black Party’ at Club Quilox on Victoria Island, Lagos and it was star-studded.
Pop stars like Tekno, Timaya, 2face Idibia, Sexy Steel, Skuki, Special Ed and many more were all in attendance. Apparently Dammy Krane was in the club as well.

Eye witnesses tell NET Dammy Krane got to the club a lot earlier before Wizkid came in around 4am.

Another source told us, ‘When Wizkid enterted the club, it seemed he saw Dammy Krane but didn’t go to meet him, then about 15 minutes later, it seemed Dammy was showing him some attitude, then Wizkid went to meet him. The next thing we saw everywhere had scattered.

Wizkid broke a bottle on his head before bouncers separated them’.
Multiple eye witnesses say Wizkid clearly attacked first before bouncers tried to separate them. Then the club owner Shina Peller waded into the fight as well.

It is not clear if Dammy Krane was injured.

‘He took them to his office to settle it’, a guest told us.

We learn that both parties then came downstairs, back to the club and acted as if nothing happened.

With a bloodied head, Dammy tried fighting back but he was held back by people. Wizkid moved to another VIP section and Dammy tried to go and meet him there to get his revenge. Once again, he was prevented. 2face and Timaya later stepped in to settle the rift. Witnesses claim the fight was settled, but we can never know..

And these are supposed to be our role models? Breaking bottles, ranting and acting like touts everywhere. Maybe Starboy thought Quilox is Ojuelegba. Mehn!